I’m a French-Canadian girl, who partly grew-up in France. I don’t know much about southern culture. I had never heard of “fried green tomatoes” before the movie came out (which I watched in French because I couldn’t speak English yet at that time), and I didn’t even know it was an actual dish before my early twenties. When I found out about it, I thought “why would anyone wanna eat unripe tomatoes??” and that was the end of that. Eating it was never something I thought I would do, because it sounded weird to me. Then later, as I started learning about eating healthy, I became more open-minded and willing to try new things, and I found myself on a trip with my niece in Los Angeles, California, where I tried to teach her to eat better and took her to all the organic, vegan, vegetarian and raw restaurants I could find in L.A. (i.e. a lot!).

One night, we went to this fancy organic restaurant, I think it was in Santa Monica, but I can’t remember, and since everything looked good and it was local and organic, I thought I’d give “Fried green tomatoes” a try! This was the first time I had ever had any. I was 30 years-old.

The dish was amazing and delicious. I thought I was silly to have missed it all my life. But then, we left California and I forgot about it (again, I live in Canada. Not exactly the land of fried green tomatoes. haha), that is until last week. Someone I follow on Instagram posted a picture of the local organic green tomatoes she’d scored at the farm and how she was going to fry them up.

Obviously, the right thing to do was to find a way to get some myself. So I did. I asked my local organic produce delivery service if they could get some for me, and they did! 🙂  A whole box!

This brings me to today’s recipe….  I started with the thought of just making a few slices of fried green tomatoes, then as usual, one thing led to another and I thought “hey, wouldn’t it be great on top of some greens?” so I got some leftover arugula (roquette) out, but while opening the fridge, I also saw my little jar of creamy goat cheese… so that came out too. Then I thought “oh, it’d be nice if I had another flavour combined with it”, so I decided to quickly fry some apple slices in olive oil. Then I thought “this might be dry, I need some sort of dressing to put on top”, and since I had just harvested all of my basil, I made a quick pesto. Then I thought combining the fried green tomatoes and raw ripe red tomatoes would be a killer contrast, so I sliced a large red tomato, but while grabbing my ripe tomato, I saw Mr. Avocado looking at me, so guess what happened? And finally, I thought some aged balsamic vinegar over the whole thing would add another dimension. But I don’t have any aged balsamic vinegar, so I made my own version of a sweet liquidy balsamic.

And I decided to stack everything, because food just looks awesome when it’s stacked. hahaha  It looks fancy, but it really isn’t hard to make (took 10 minutes), once you have your apple slices and green tomatoes fried, it’s just a matter of stacking everything. Or if you prefer, make a sideway stack. (pictures below)

I normally would’ve used an egg wash, but I was out of eggs, and every recipe would usually call for cornmeal or panko-style crumbs, but I had none, so I made my own awesome crumbs by putting a couple of handfuls of organic nachos through my mini-processor 🙂 It worked out so well!

Warm a large pan on medium heat. Cut the tomato slices, dip into the ground nachos, pressing it on the tomato. Add olive oil to pan and put the tomato slices in. Keep and eye on them so they don’t burn, cook for a couple of minutes each side, until they’re nice and golden. If you want, sprinkle a bit of organic paprika powder on top for a little kick.

If you want to stack your salad, simply layer the fried green tomatoes with raw tomato slices, slices of avocado, slices of warm roasted apples (simply slice the apple and cook about 30 seconds each side in the pan), add some creamy goat cheese (unless you wanna go vegan) and fresh pesto, drizzled with warm balsamic (cooked on medium-low with maple syrup for 10-15 minutes), throw in a handful of arugula leaves, and voilà!  It was sooooo good! 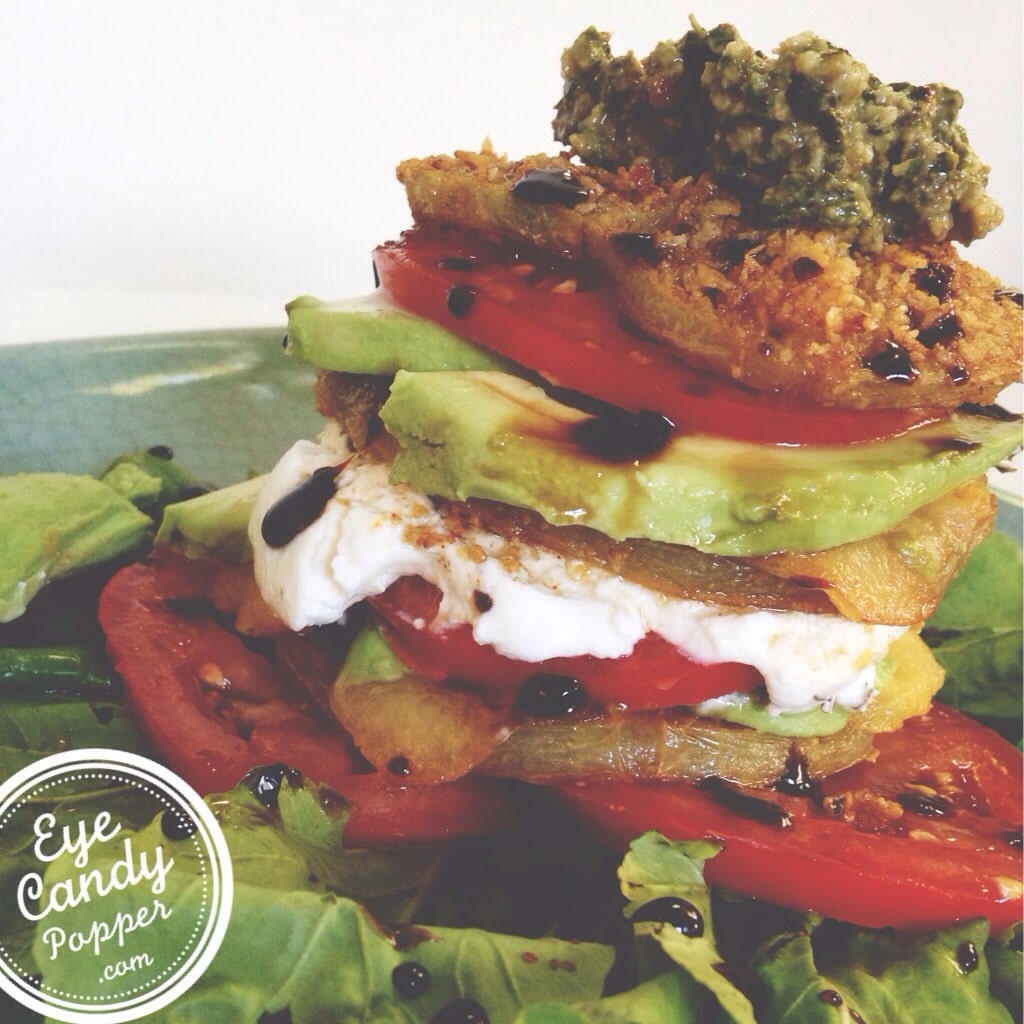 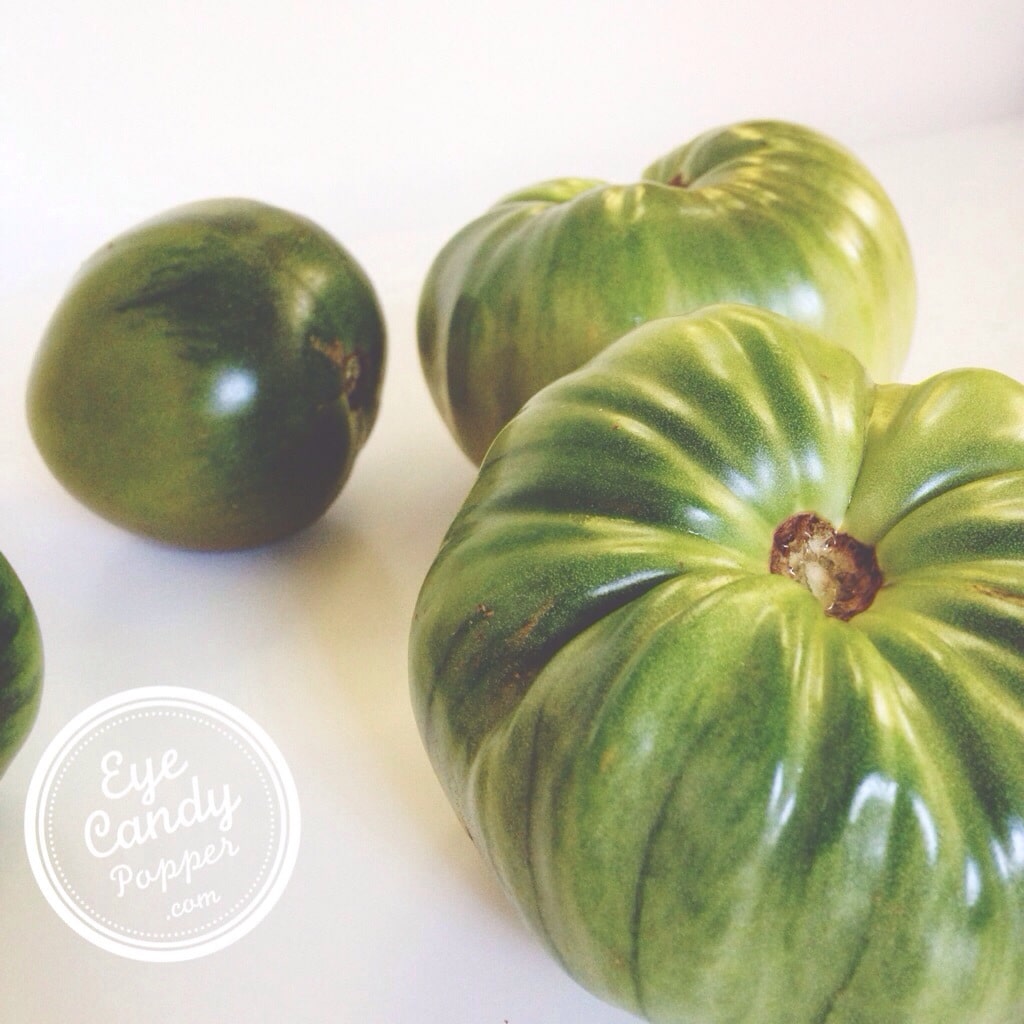 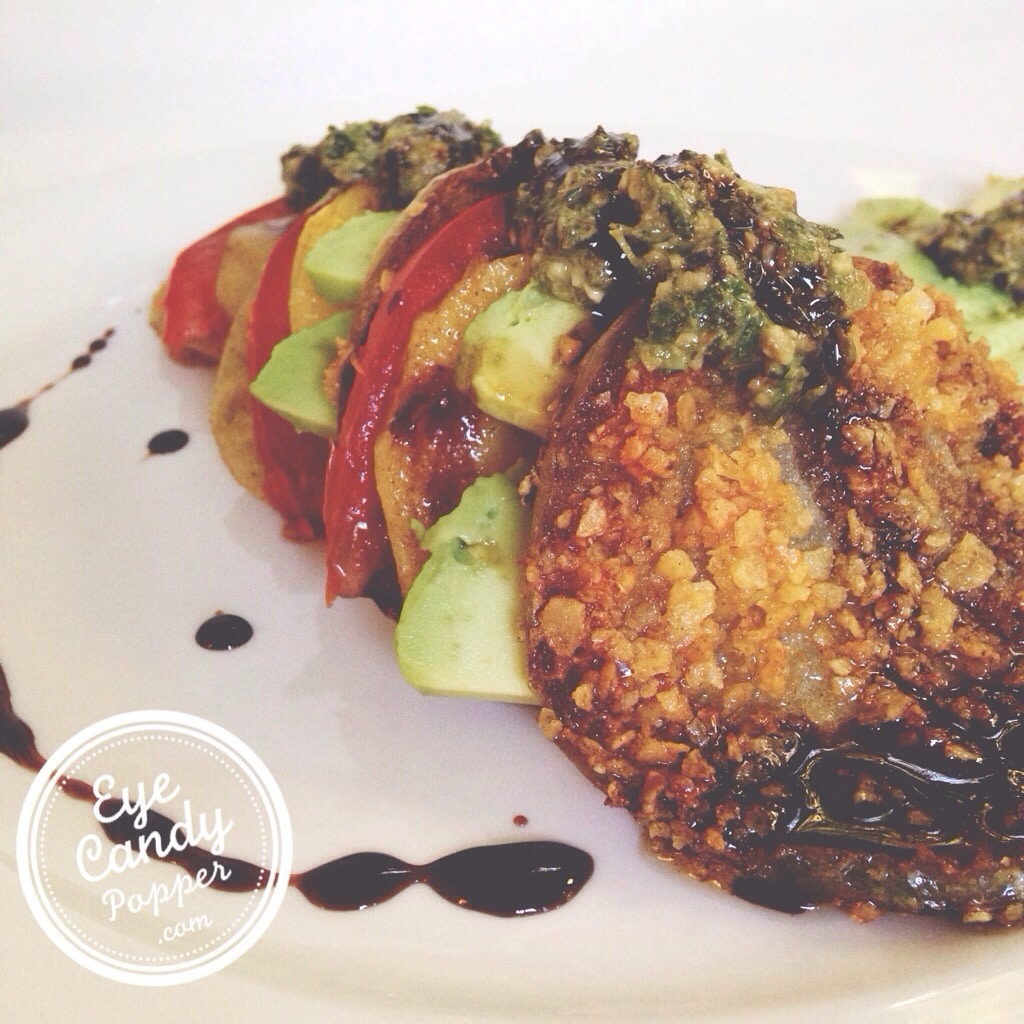 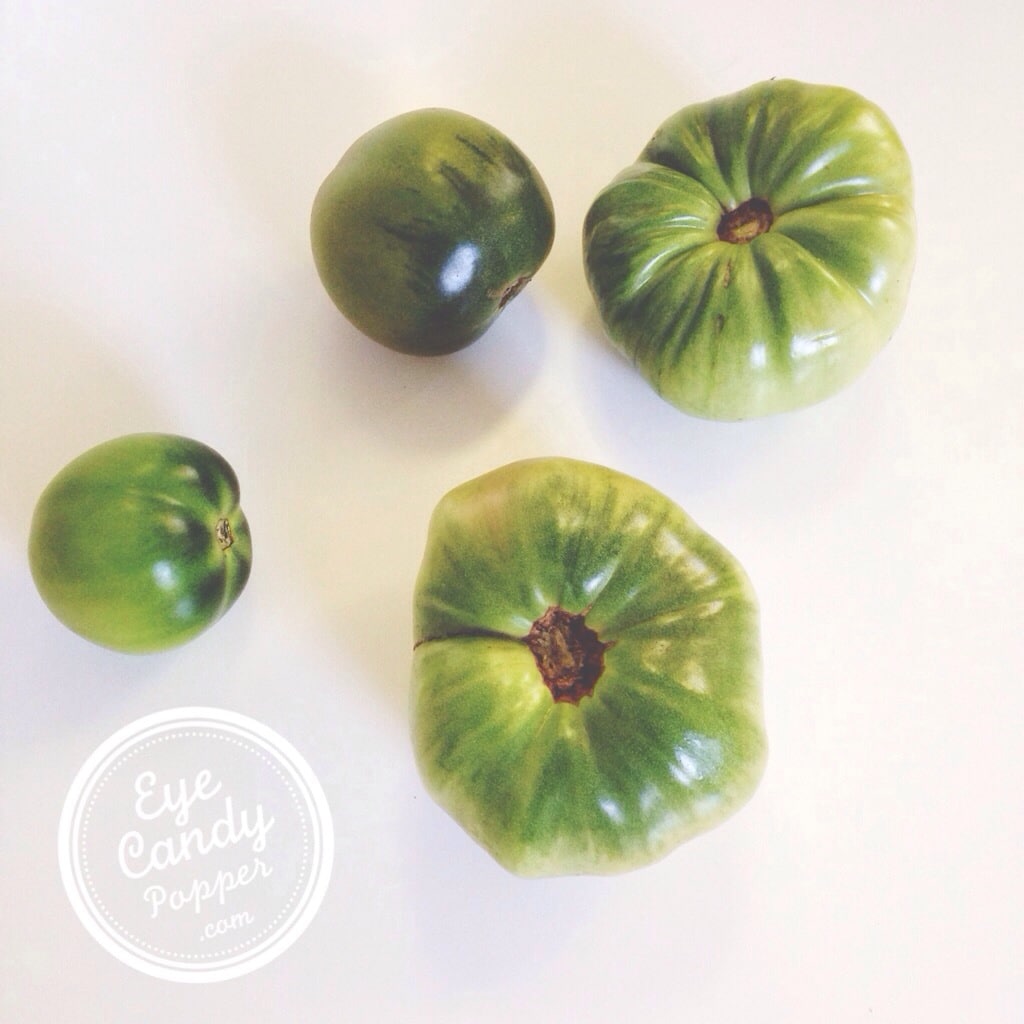 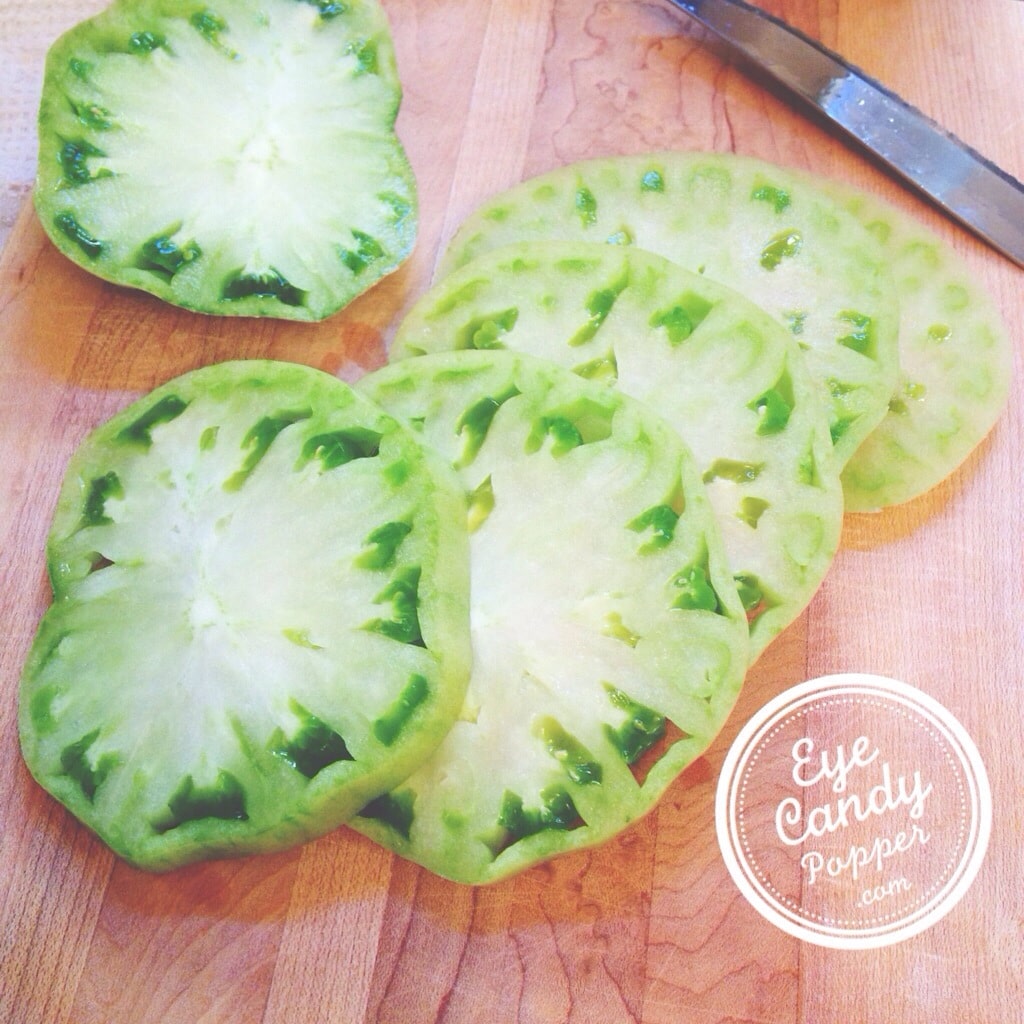 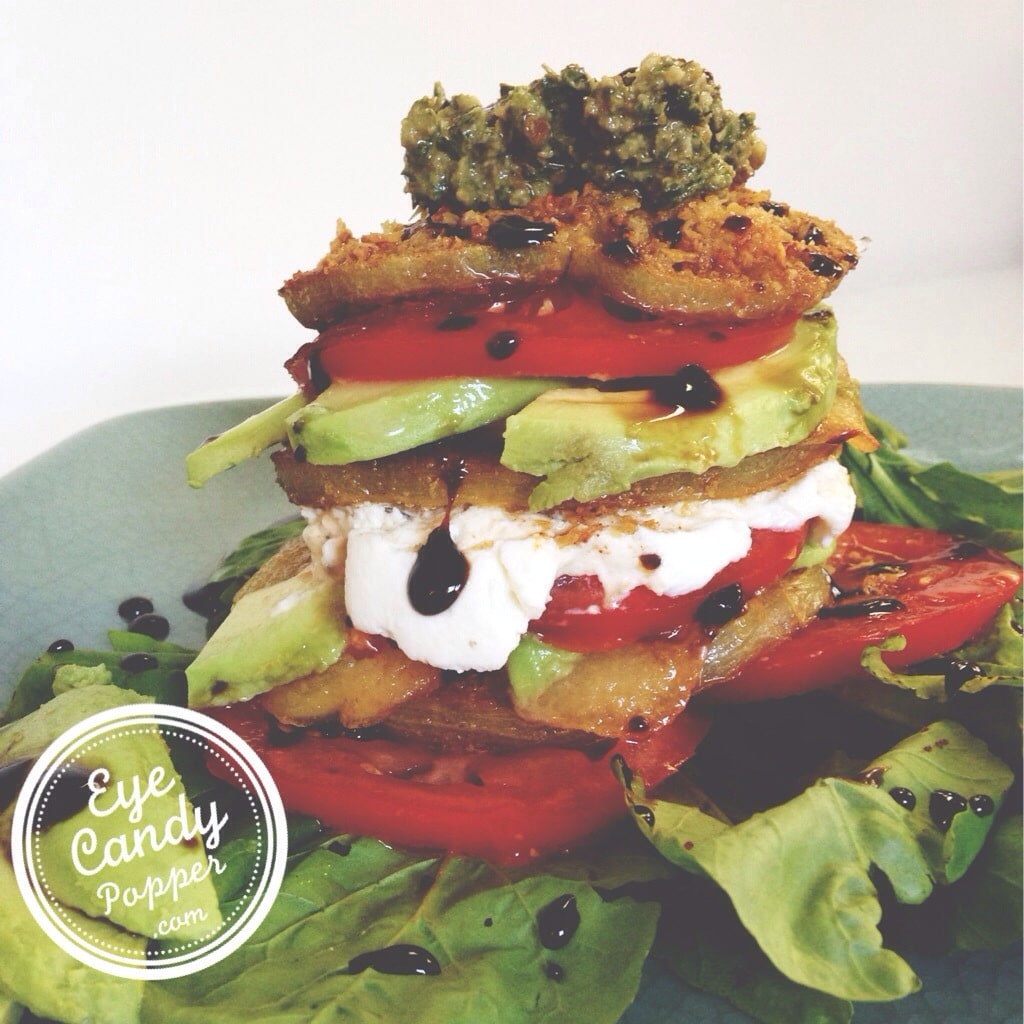 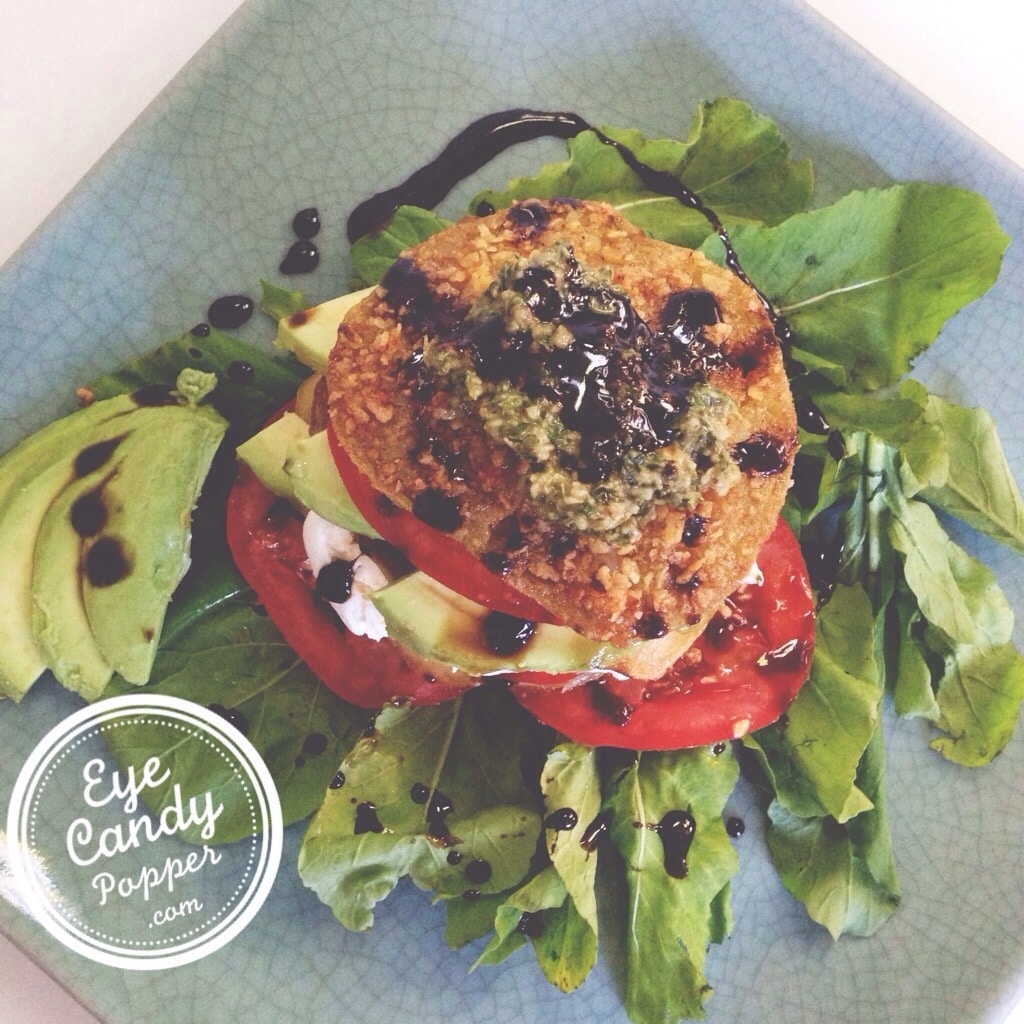 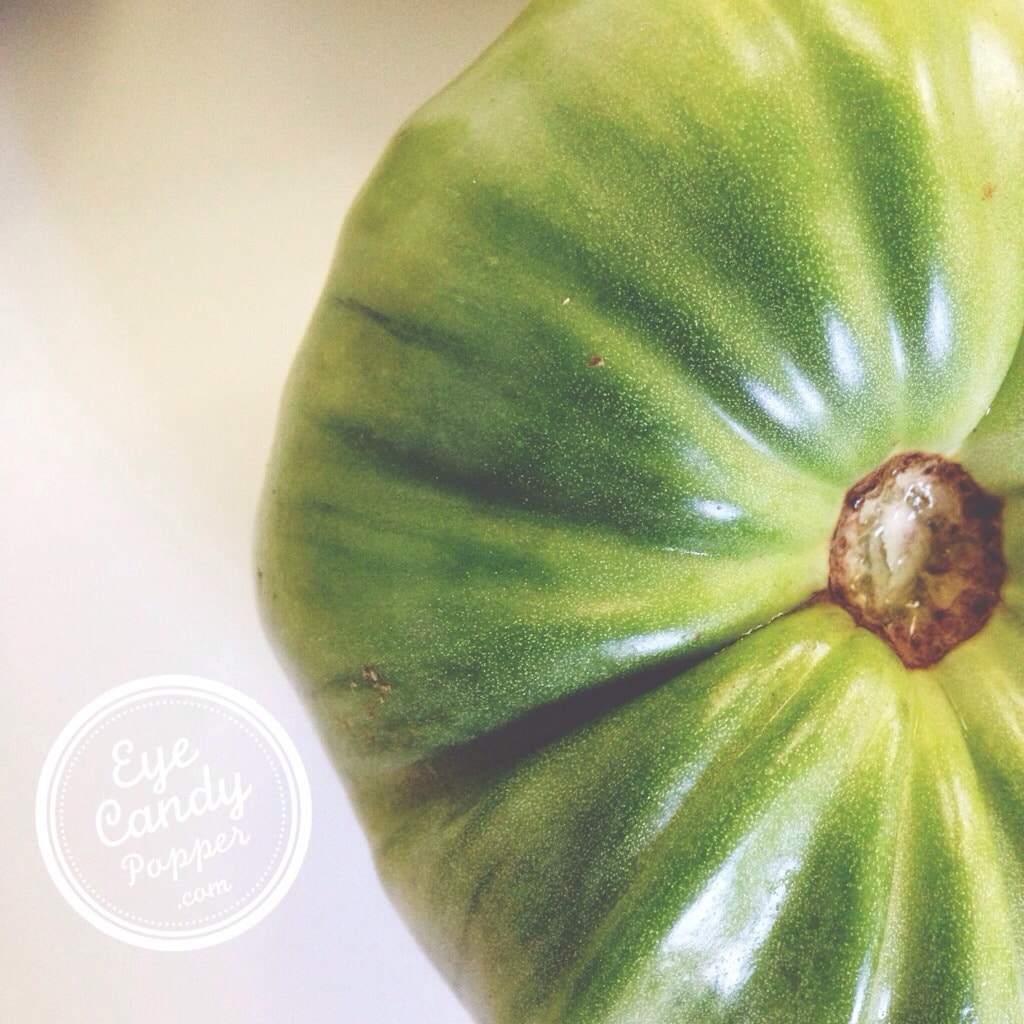 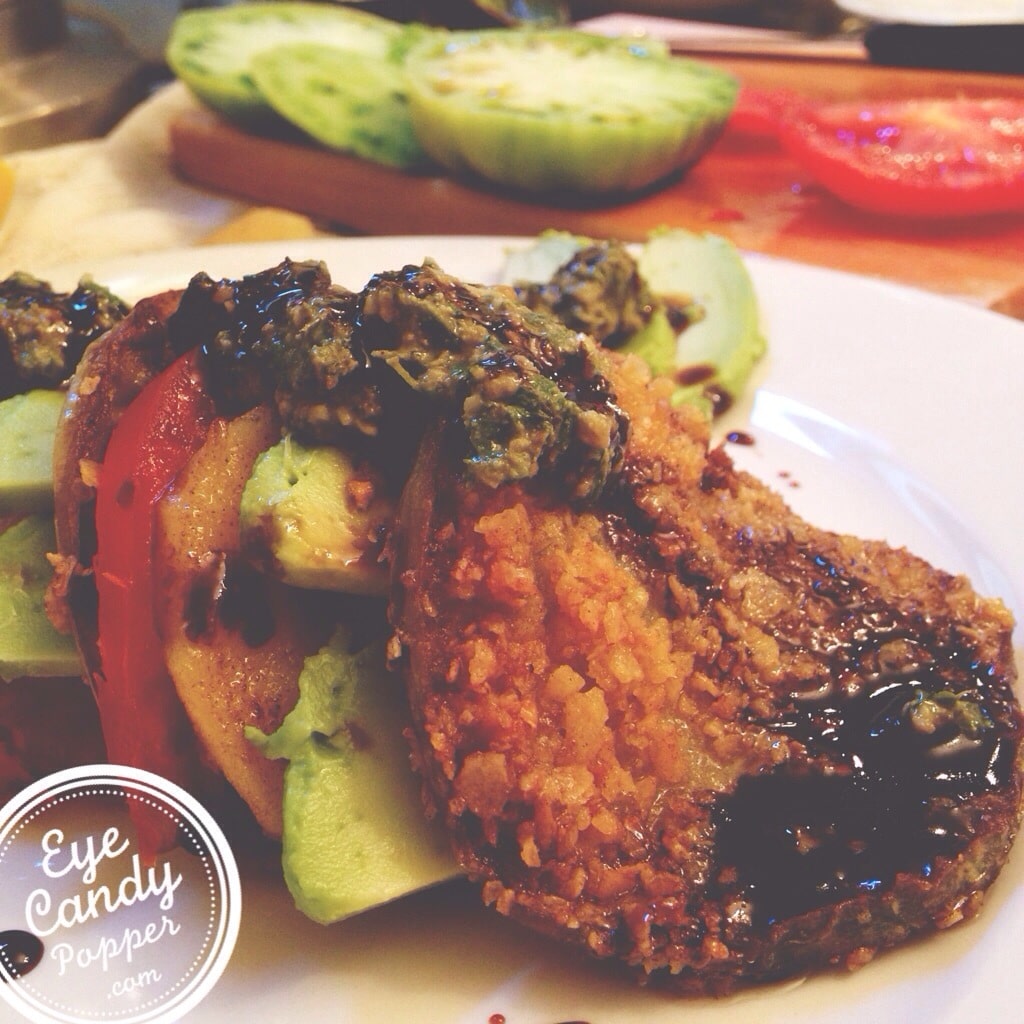 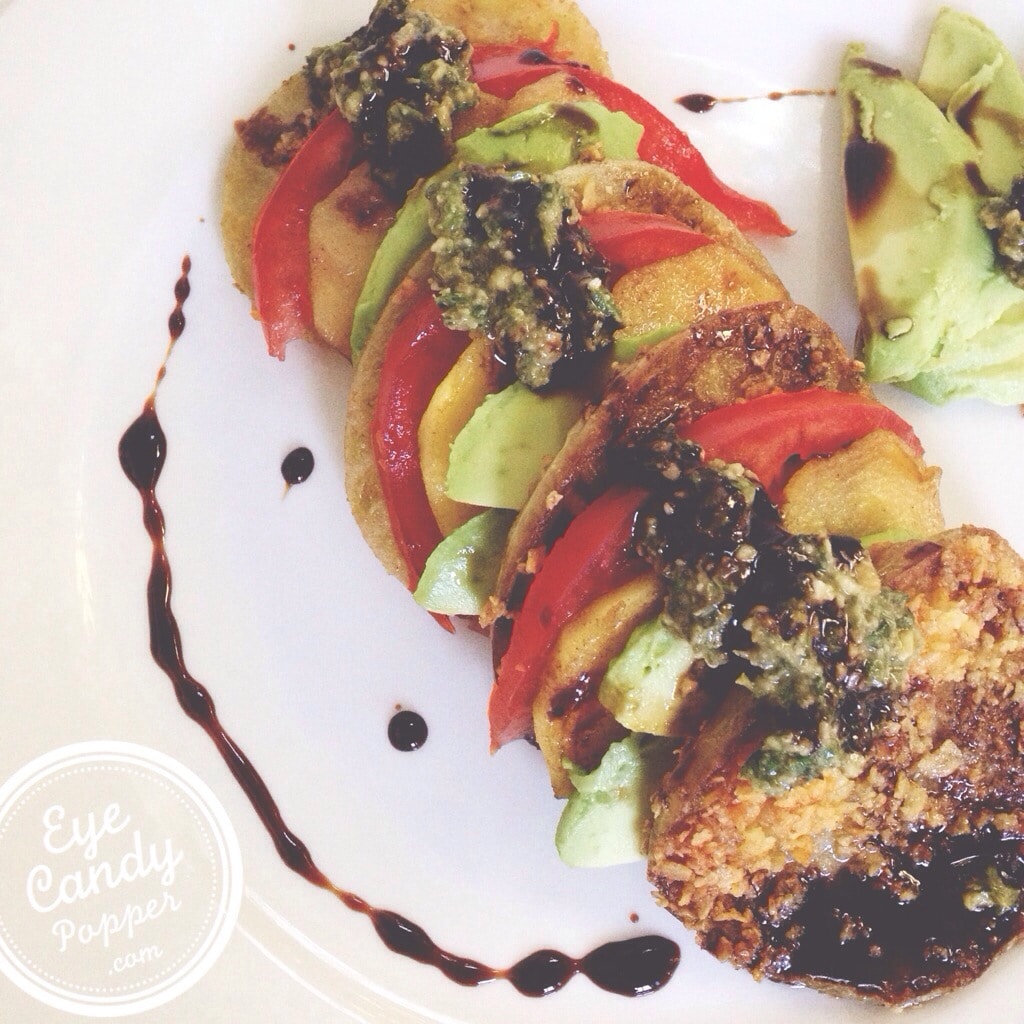