Home » Environment » Grow your own potatoes — in a bag!

I can’t remember exactly when it was this summer, maybe a few months ago, I had about 1/3 of a bag of clean soil (pesticide-free) leftover from the beginning of gardening season, and I happened to have a few old organic potatoes that were germinating in my potato basket that I was about to throw out, so I decided to give it a try. I had heard about growing potatoes in a bag of dirt, and thought I’d see what happened. So I took my small germinating potatoes, I think I had a few kinds in there, and just planted them in the bag.

No tools necessary, no pot necessary. Just your hands. Simply push the dirt to create a hole as deep as you can in the bag, but making sure you leave at least a few inches of soil at the bottom. Put the old germinating potatoes in, cover, give it some water so all the soil is moist. I grabbed a small knife and jabbed the bag in several areas at the bottom of the bag, to make sure the water doesn’t get stuck in there.

And I left the bag lying around on my patio. I think I gave it a bit of water a few times, especially when it was really hot and dry. Other than that, I barely touched it. This morning, I decided it was time to see, and this is what I got. 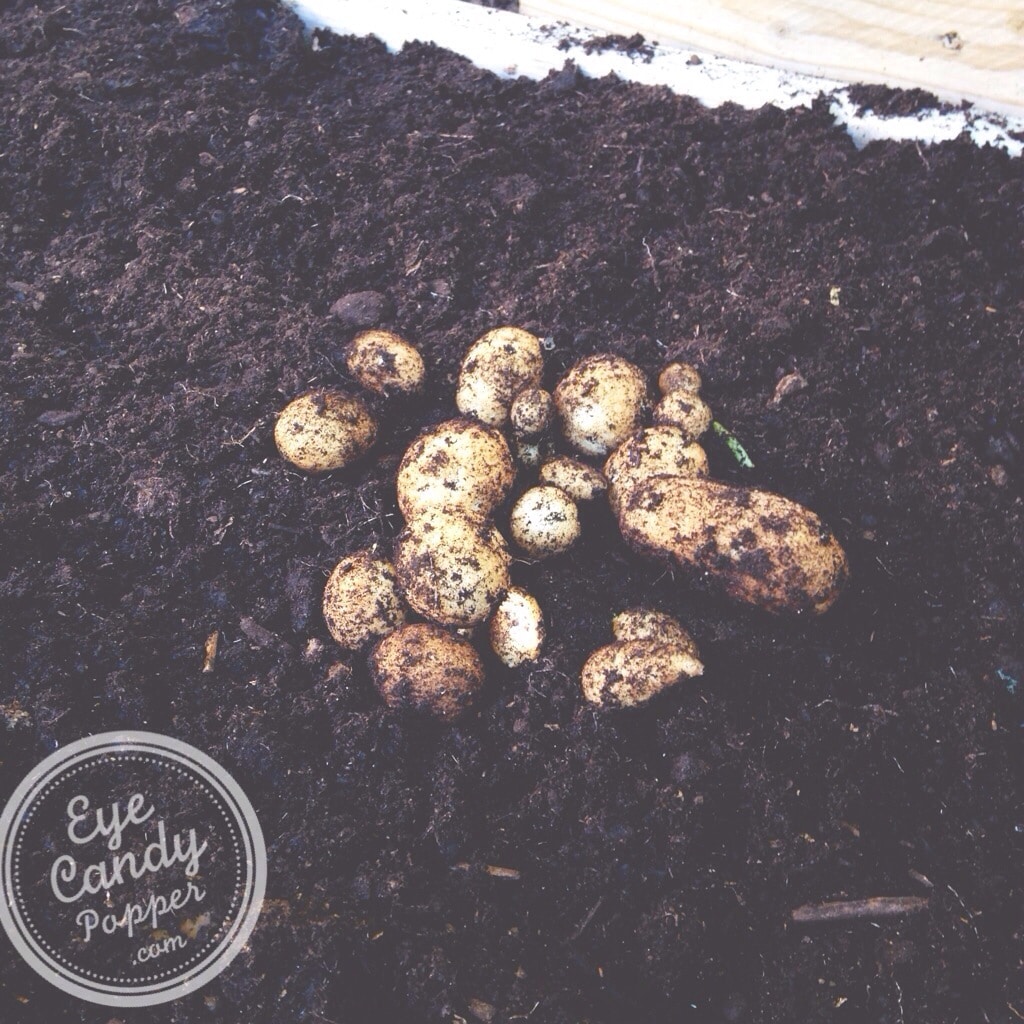 haha It’s not the most amazing result, but it’s pretty good considering how little work it was, and that it was free, since I had the bit of soil left and the potatoes… well, I was about to throw them out, so really, it’s a positive result! I realize that I wouldn’t eat much if those were the only potatoes I had for the winter, but it’s still not bad.

We tend not to talk about planting potatoes much in small urban gardens, but these are great because you can plant them literally anywhere. The easiest way to get a good return is to plant your old, germinating potatoes in a tall container (like a garbage can) with a little bit of soil at the bottom, then once you see the leaves growing a couple of inches above the soil, add another foot (12″) of dirt on top of that, and repeat a few times until you’ve reached the top of your container. Give it some water when you see the soil getting too dry, but don’t over-water it, and make sure there are holes at the bottom of your container for the extra water. Wait a few months, and in the fall, dump the soil out of the garbage can and get your harvest!

Don’t throw the soil out! Put it back into the garbage can, and throughout the winter, add some raw vegetable leftovers or clippings, mix it in the dirt. That will decompose and give vitamins to the soil, to be ready for next planting season!  🙂

Hopefully next year I remember to plant some more potatoes in an old (clean) garbage can, or a larger bag so I can get more!

This was the bag I used (it wasn’t even halfway full of dirt), and the remains of the potato plants. 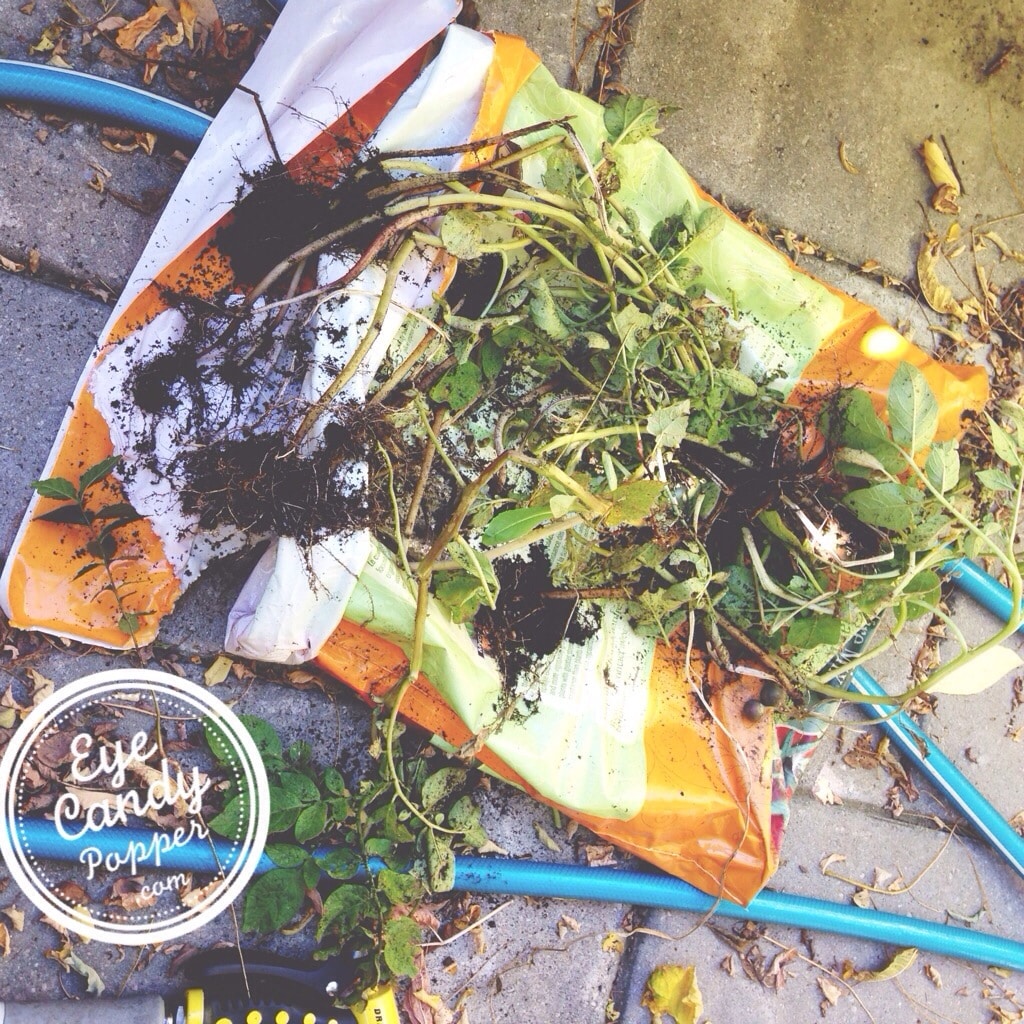 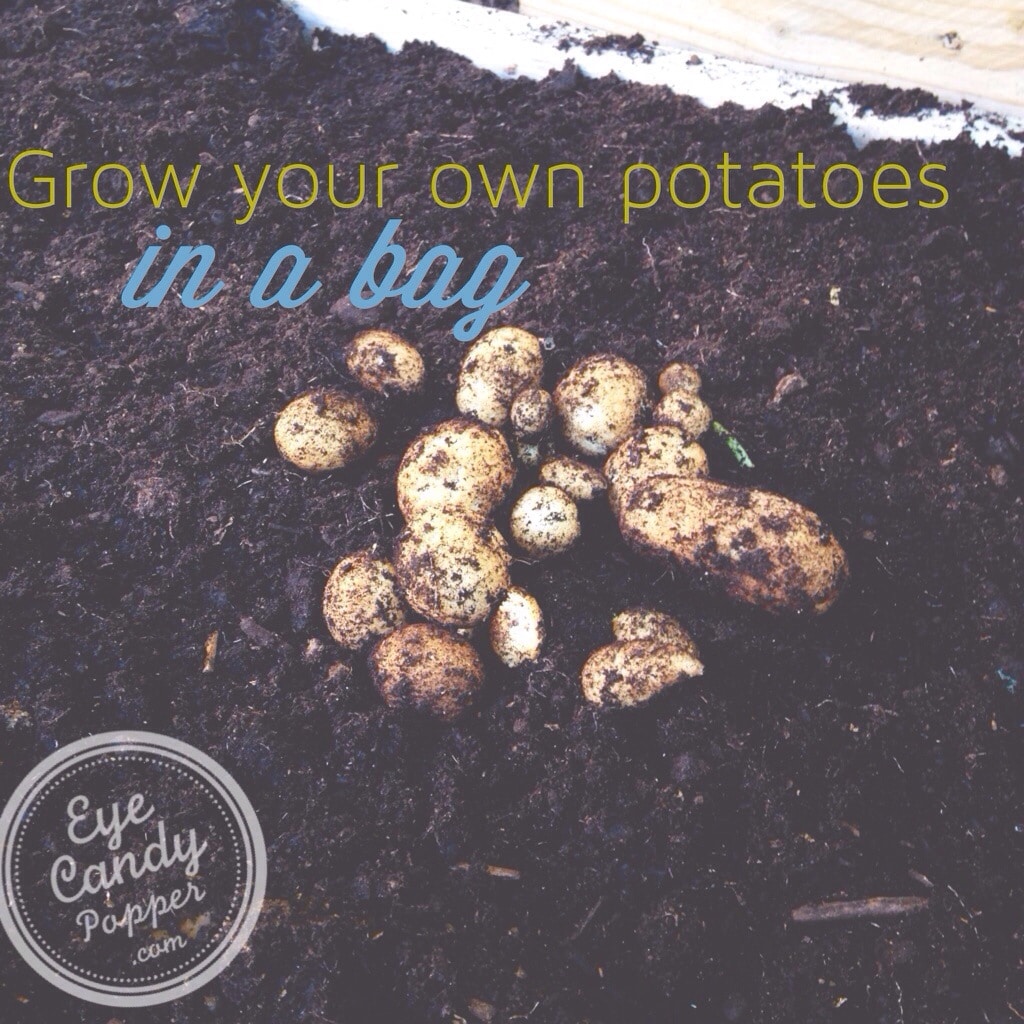