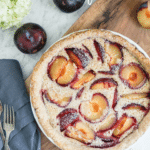 Little did I know it back when I was a kid, but making a Tarte aux prunes, a Classic French Plum Tart, would hold a special place in my heart. 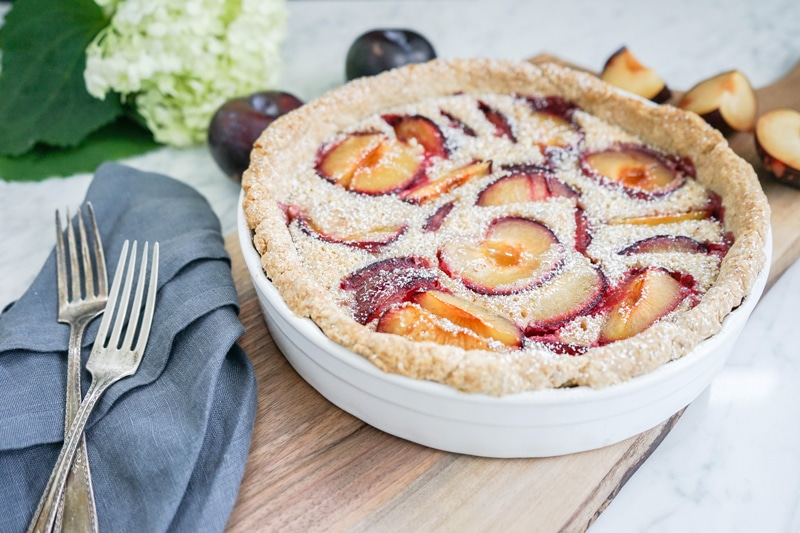 My grand-mother in France passed away a few years ago. It still feels weird to think that she is gone. Not too long after she died, while cleaning some of my old boxes, I found a few letters from her (I had regularly written to her since I was 12), and reading them made me laugh and cry. I’m like her in so many ways. In one specific letter, she mentioned how someone had visited her and while looking at a picture of me in her kitchen, said that I looked like her, and how happy it made her. She had a big heart, but she was also a stubborn old lady when she wanted to. haha 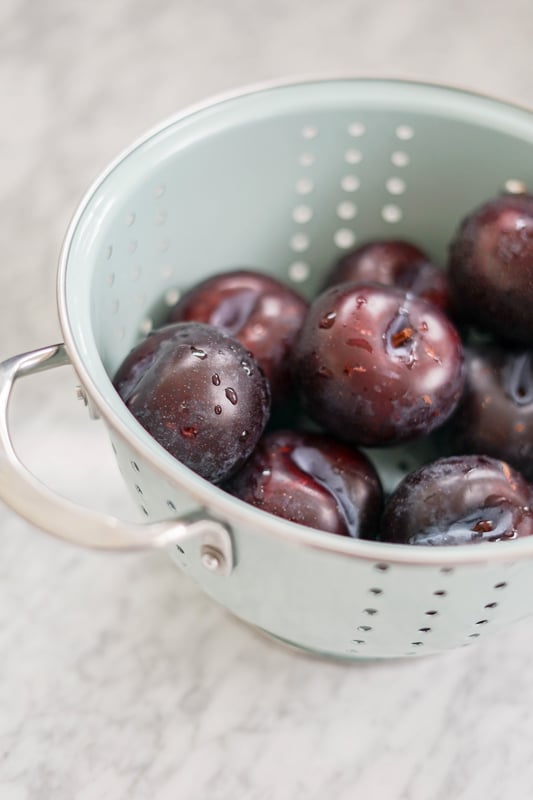 She was born during the first world war in rural France. Her parents didn’t have much money, especially when her father lost his sight during a bomb explosion. Times were difficult, but she loved to read to her father and learning. She lived through the second world war as an adult with young babies. She didn’t have an easy life by far, and I don’t mean for this post to be sad, but she was a strong woman and a great model of strength. After she divorced (a big deal in France in the 50s), she bought herself a small piece of land on the edge of town, with a tiny house on it.

She didn’t have a lot of money, so food came primarily from her garden and her chickens giving her eggs and meat, and some rabbits for meat as well (she killed them herself, in the most humane manner possible). In one of her letters, she says (even in her 90s) how much joy she got from taking care of her garden, watching the vegetables grow, and of course… eat it! haha My grand-mother was a gourmande and a talented self-taught chef. Some of my favourites were peas and small onions fresh from her garden, slow cooked in an old clay pot, with fresh thyme. She’d serve them to me with slow roasted crispy baby potatoes. Oh my! So delicious (I was a very picky eater as a young child, battling chronic anorexia, so she created special little meals for me). She would also make one of the most incredible paella. I know, not traditionally French, but she sure made a delicious one! 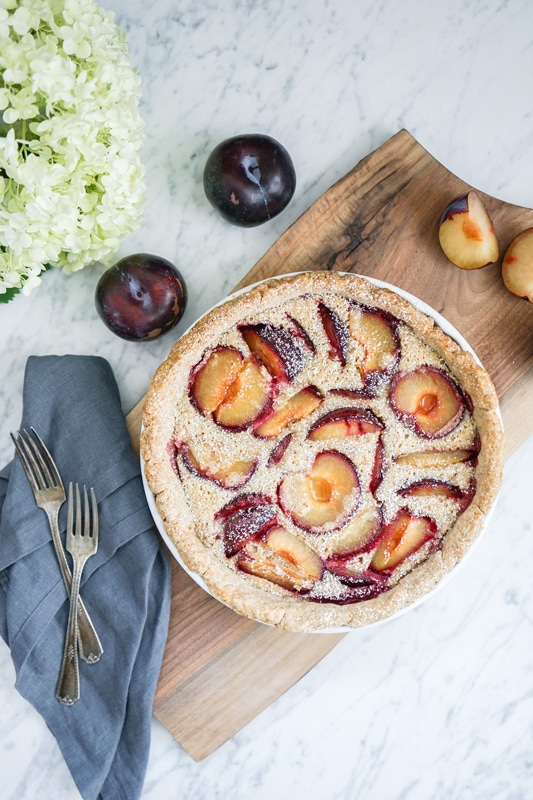 She was 98 when she passed away, and lived alone until just a few years before that. She had her small potager with various vegetables and fruit trees like cherries, plums, figs, peaches, grapes, as well as groseilles (red currant) and cassis (black currant). She’d use everything up, nothing was wasted. She’d make jams, preserves, pies, cakes, broths, etc. She’d freeze some of her vegetables for the winter, like peas and green beans. The scraps would go to the happy chickens and rabbits. Without knowing, she ate pretty much all organic, she was the ultimate eco-friendly person, before it was popular, and before I knew how important it was.

This brings me to this post. When I get plums in my organic delivery in the summer and wonder what to do with them before they go bad, I often have memories of my grand-mother’s tarte aux prunes. Most French women made plum pies back in the days. She used to make it often during the summer, using her own plums, of course. The funny thing is, as a kid, I remember not liking it very much. Later, as an adult, when I went back to visit her in France, I learned to like it, and now, nothing seems to make more sense to me than to use those organic plums and make a classic French plum tart. I almost never use butter or white flour in my baking, but this is for a special occasion. 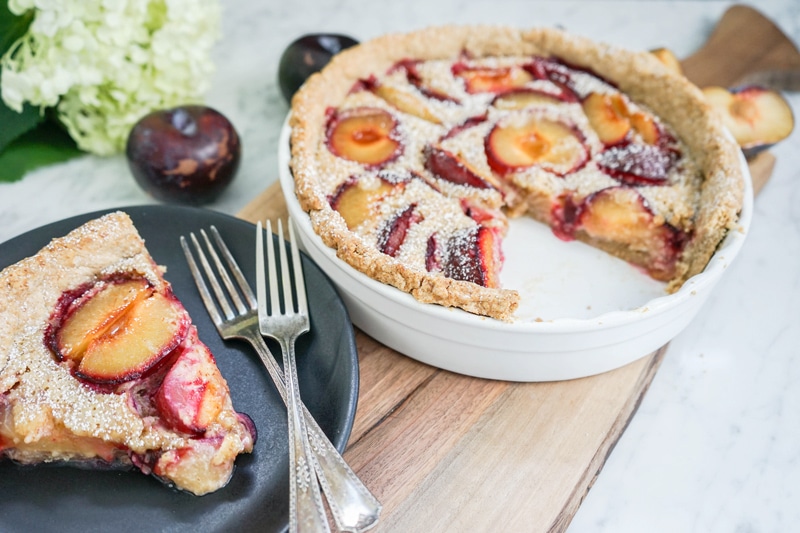 Depending on the size of the plums you use, you might need 4 extra-large ones or 7 regular size ones. 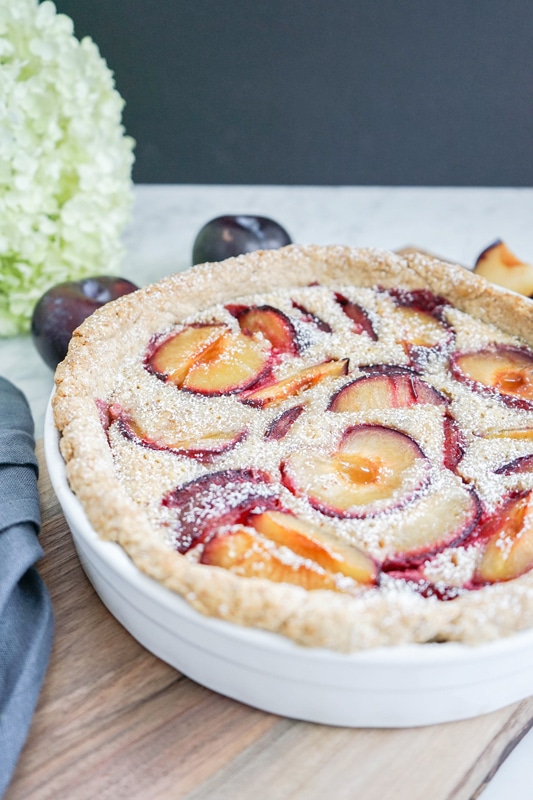