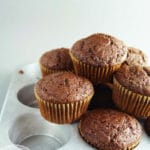 This recipe for wheat-free double chocolate olive oil muffins is a great way to begin reducing your consumption of wheat.  The recipe is further down the page.

If you’re new to the Wheatless Wednesday series, it is not meant to portray wheat as the bad guy (I still eat some once in a while), it is not necessarily meant as a gluten-free choice either, even though I do offer a lot of gluten-free recipes, but some are also low-gluten (because other grains that contain gluten have a much lower gluten content than durum wheat — you can read more about this gluten-free myth here), but it is simply meant as an encouragement to try other grains, to venture outside the usual boredom of always using durum wheat flour for every single baked goods (and more). 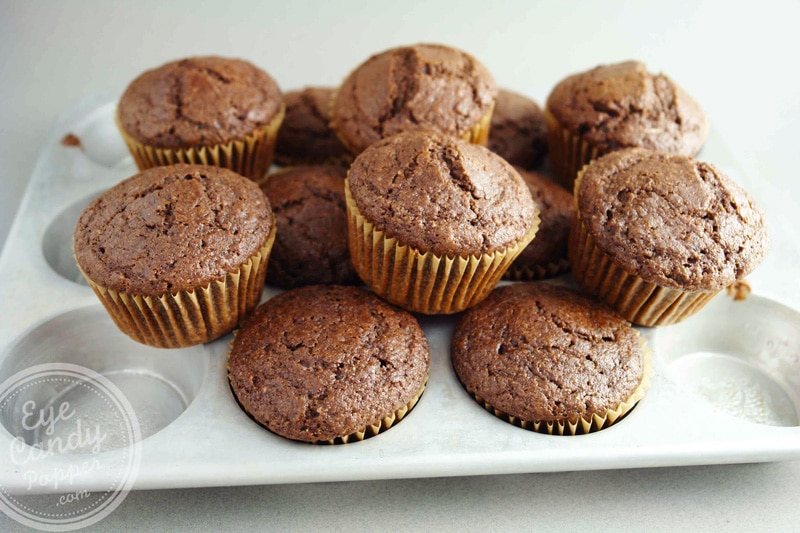 Many years ago, at the beginning of my journey to health, I decided that it didn’t make sense to always eat the same grain over and over, especially when we have such an abundance of various grains and various flours available in the part of the world where I live (Canada). Even though gluten-free was not a “thing” just yet, people were starting to develop sensitivities and allergies to it, and it only made sense to me that, as good as it might be, too much of a good thing can be a bad thing. So, we (my husband and I) voluntarily decided to cut wheat out of our lives at home as much as possible, because I didn’t want to continue and then eventually becoming so allergic to it (like so many people now) that I would have to stop eating wheat entirely.

At that time, I remember people at my work looking at me funny, thinking I was a bit odd. I would suddenly start buying spelt and Kamut bread, and brown rice and sesame noodles. These were the beginning steps. The funny thing is that, until then, since I had already started making changes to my eating habits, I had already switched to multigrain bread and whole-wheat pasta, and brown rice, but truth be told, even though it wasn’t bad, I really started enjoying eating healthy when I cut wheat out (mostly — as I said, I still have some wheat once in a while, usually at a restaurant or something). It’s not that whole-wheat is bad, but spelt, Kamut, rye, buckwheat and others are so tasty, there was no going back by that time! 🙂

I know a lot of you are a bit scared of trying different flours, but all I can tell you is “Just give it a try”. Don’t be afraid of trying something new, because maybe, just as I did, you’ll love it so much, you’ll wonder why you haven’t tried it earlier. 😉

So, today, I am sharing this delicious double chocolate muffin recipe that I’ve made a few times for my husband’s snacks at work. I used a combination of spelt, rye and buckwheat flours. All 3 are available in most health food stores as well as most large grocery stores that have an organic or natural section. Just look for it, or ask for it, they might be able to order some. As always, I recommend buying organic flours, and ideally that are stone-ground, because I discovered recently that most commercial flours are ground with steel, which heats up too much and destroys most of the nutrients from the grains; stone-ground on the other hand stays cool and retains not only nutrients but also the germ and more fibres. So, organic and stone-ground is the best way to go if you can.

A recipe for wheat free double chocolate olive oil muffins, a healthy real food snack which is dairy-free and low sugar. From my Wheatless Wednesday series! 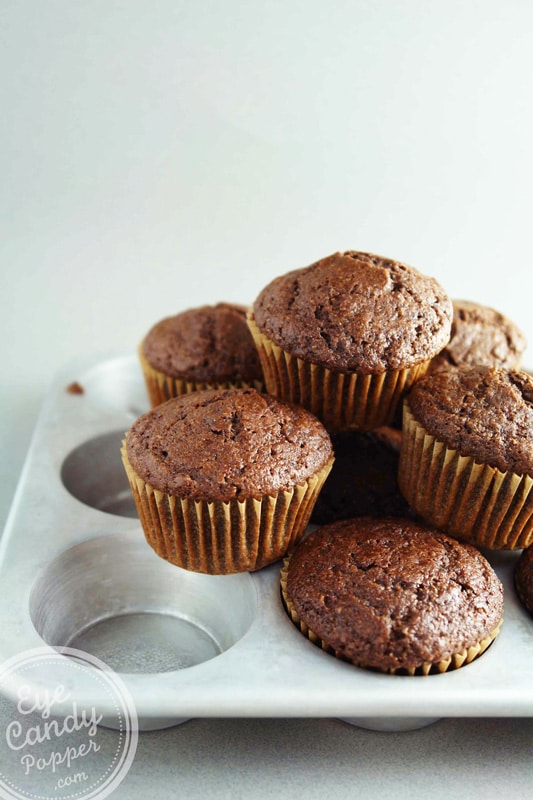