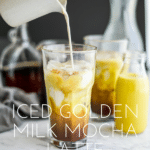 Are you a coffee drinker? I’m not. I might drink one occasionally, but it’s pretty rare. Back in the days before I was eating healthy, I remember that I would sometime get an iced coffee from a popular coffee shop in the summer, so when Botanica Health asked me to create a recipe with their organic Golden Mylk, I immediately thought of creating a healthy version for this! Perfect timing for the summer weather, I made an Iced Golden Milk Mocha Latte for your pleasure, and you can make it with or without coffee. 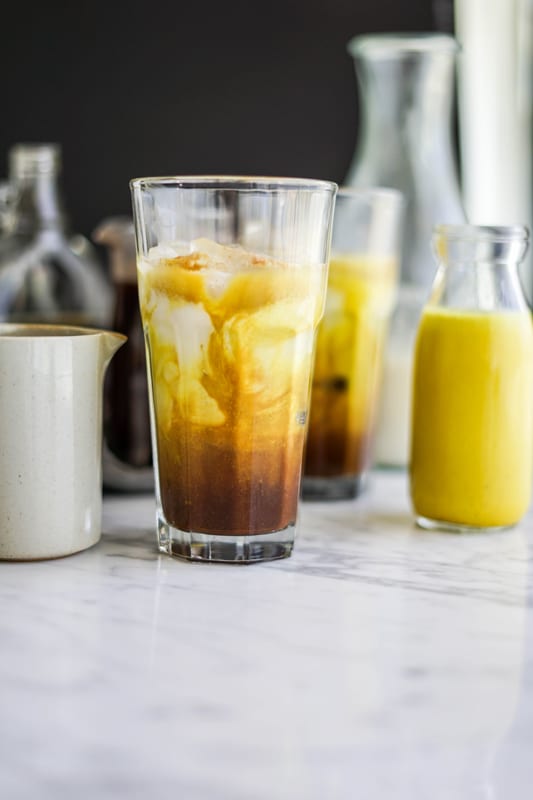 *This post is sponsored by Botanica Health. I received a free product and was compensated to create this post. All opinions are my own.

What’s the deal with this golden milk/mylk anyway, you might wonder? First of all, let me explain that it’s sometime spelled mylk instead of milk just to differentiate between regular cow milk and plant-based milk, but to make it simple for everyone, I’ll just use “milk”. 🙂

Golden milk is made primarily with turmeric, this amazing spice that contains curcuma and has many health benefits, healing and anti-inflammatory properties that has been used in ayurvedic medicine for centuries. Modern science has caught up and now recognizes that turmeric is pretty awesome! Turmeric has been shown to not only have anti-inflammatory properties (meaning it fights inflammation in the body – which is linked to many diseases), but also anti-depressant, anti-coagulant, anti-cancer and anti-arthritic properties, since it’s a powerful antioxidant. Antioxidants help our bodies to fight against free-radical damage (the stuff that can turn into cancers) and oxidative stress. It’s also shown to be helpful in slowing down the progression of degenerative diseases, and boost memory.

Golden milk goes beyond just turmeric, because as with many foods, its properties are boosted and made more readily bio-available when it’s combined with other foods, such as coconut milk, and specifically when it’s combined with black pepper. Bio-availability means that your body absorbs it much more easily, makes it easier on the digestion, and processed faster, so you get all the goodness even faster to your bloodstream and more of it.

Coconut milk is also anti-inflammatory and contains good fats that are beneficial to our digestive system. Botanica’s Organic Golden Mylk is made with whole turmeric, coconut and black pepper, but also contains other amazing ingredients, like dates instead of sugar, and ashwagandha, which is a popular adaptogenic herb that helps restore normal bodily function, and resist the damage that stress can cause. All this conveniently available in one jar, and ready to use to make some Iced Golden Milk Mocha Latte! 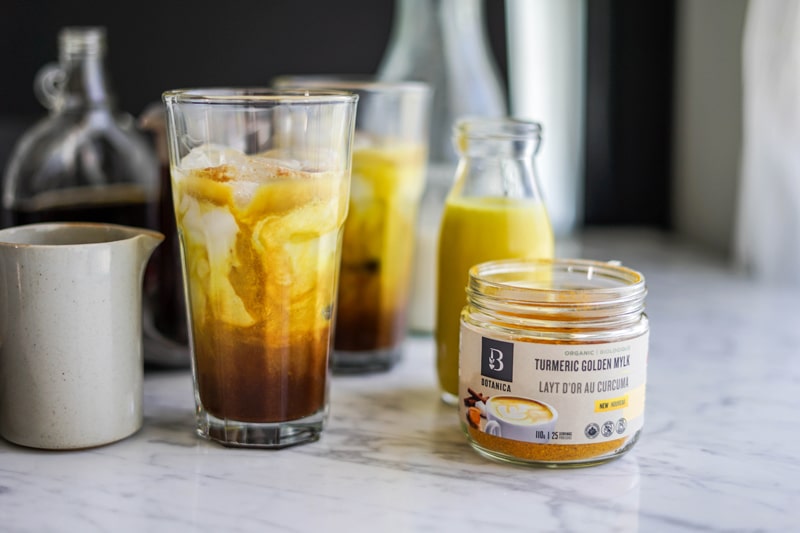 I made this Iced Golden Milk Mocha Latte using real ingredients, along with the Golden Mylk mix that Botanica sent me. I used a coffee substitute made out of roasted chicory in this recipe because I didn’t want too much caffeine, but you can certainly use regular coffee if you wish! (I do recommend organic coffee in order to avoid pesticide residues)

The recipe also calls for some organic cocoa powder to make it easier, but you could also melt some baking chocolate to make it even creamier and rich. I also used maple syrup instead of sugar, to keep it light and add another amazing flavour.

You might wonder if the turmeric will taste very strong? I gotta say, I was wondering that too when I got the Golden Mylk jar. I had never tasted golden milk before. I tried it for the first time warm, following the instructions, and I was so pleasantly surprised at how delicious it is! The taste is mild, but it’s so very comforting. I wasn’t expecting much, but I felt a very real sense of relaxation, which was a great surprise! I can definitely see myself enjoying a cup in the evenings, especially when it’s cold outside.

But today’s recipe is for summer, although you get all the benefits too! Very refreshing served on ice.

I used a thick creamy version of my Homemade Cashew Whole Milk in this recipe because I wanted it to be thick and creamy, but you could also use more coconut milk if you wish. To make the cashew milk, I used 1 cup of whole raw cashews and 3 cups of water (follow the rest of the instructions in the recipe).

This is going to become this summer’s favourite drink!

Want to win a jar of Botanica’s Golden Mylk? Check out my Instagram or Facebook page for all the details (contest open to Canadian residents over 18)! 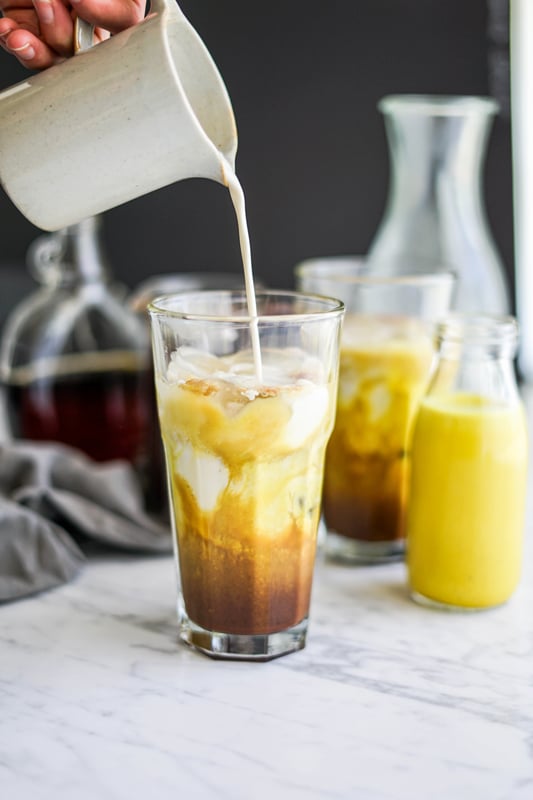 This can be prepared ahead of time, so feel free to double or triple this recipe and keep everything in the fridge for a convenient ready-to-go drink.

I do not believe anyone should worry about counting calories, but here is the nutritional information 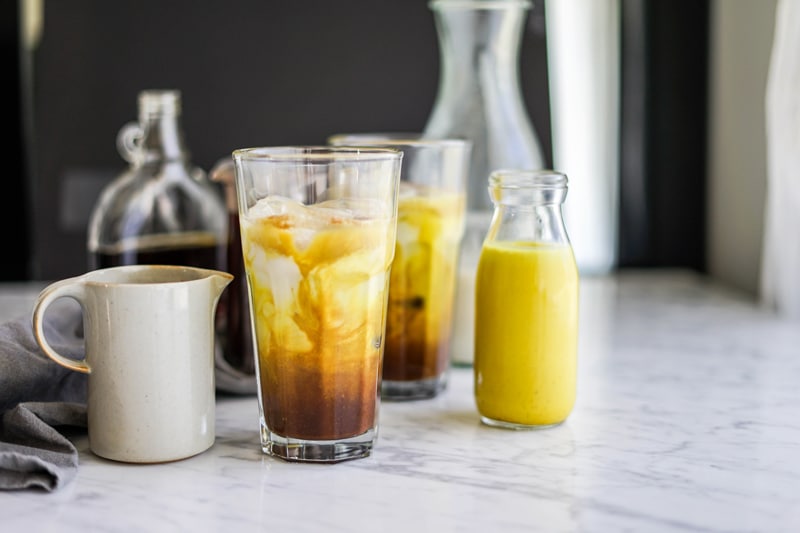 We hate spam, your email is safe with us!
Previous Post: « 20 Tips For How To Sleep Better
Next Post: Simple Tomato and Garlic Confit | Vegan, Gluten-Free »