Home » Active Living » I Don’t Wear Deodorant. There, I Said It. 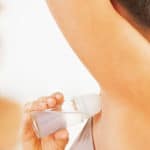 At the risk of embarrassing myself, I think it’s time I admit something private about me. But, while we’re at it, embarrassing according to who exactly? I’m not sure.

I don’t wear any antiperspirant or deodorant (not even natural) on a daily basis. Are you shocked? Yeah, I get that look a lot when I say it (to the few people I’ve admitted it to). During my quest to become as healthy as possible, I discovered about the many (many!) chemicals that were part of the small container I was using every day to rub on my armpits (antiperspirants AND deodorants contain harmful ingredients). The problem is that I sweat. A lot. But the more I learned about the contents of these products, the more determined I became to completely stop using them. 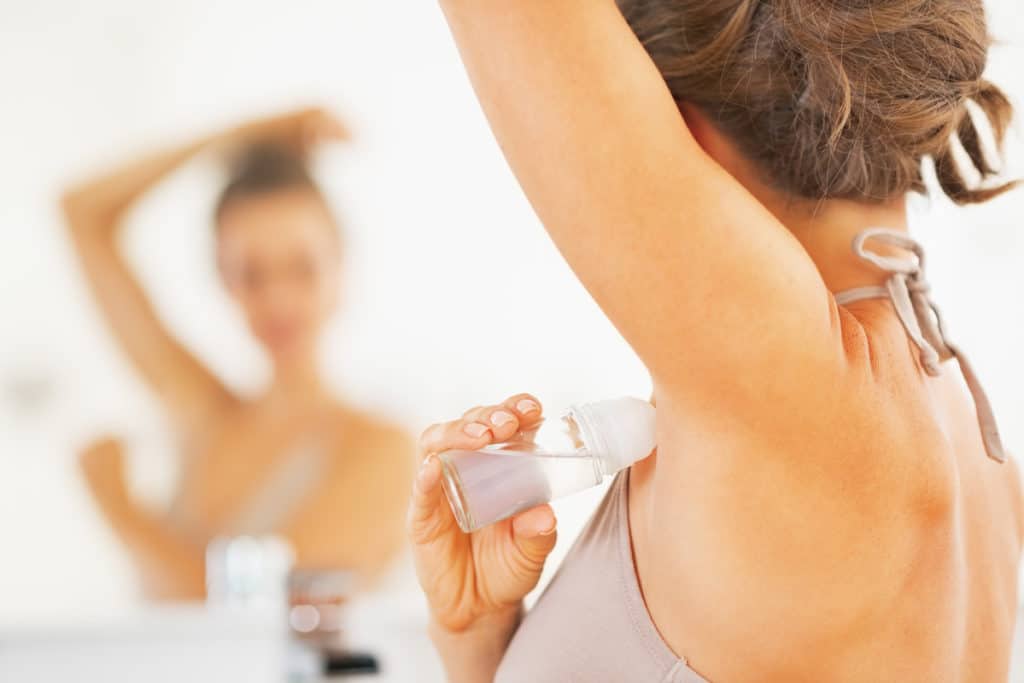 What’s the difference between deodorants and antiperspirants?

In my case, I decided to stop using both of these products.  These days the two have become somewhat interchangeable, so you will find that most antiperspirants will include deodorants, and vice versa.

So what’s wrong with deodorants and antiperspirants?

Both products contain ingredients I decided I did not want to put on my body.  Let’s explore some of these.

Aluminum is a dangerous heavy metal that can affect your nervous system and has been linked to diseases like Alzheimer’s, Parkinson’s and Breast Cancer.

While some people argue that the aluminum (and other chemicals) used in antiperspirant is in such tiny amounts, it wouldn’t be dangerous, we need to remember that this is just one of many products we might use which contain it. The issue of accumulation is something to strongly consider, and eliminating as many sources as we can should be a priority. Also, let’s remember that it blocks your pores in order to keep the sweat IN, but sweat is a normal process used by our body to remove harmful toxins (similar to going to the bathroom…). We need that process to function properly. Stopping it is not healthy.

You will find this ingredient in many cosmetics, including deodorants.  There appear to be links to breast cancer and it is thought to alter your body’s hormonal balance.

This ingredient is added to kill bacteria (to control body odour), you will also find it in hand sanitizers.  Unfortunately, this kills all bacteria, including the beneficial bacteria you do NOT want to kill.  Triclosan is classified as a pesticide by the FDA and has many possible toxic health affects indicated.

So, I thought that these reasons alone were sufficient to make me never want to wear antiperspirants or deodorants again.

How I stopped using deodorant completely

Even after I’d decided I wanted to stop using deodorants, it wasn’t that easy. I tried. For many months. I started by not wearing any during weekends, and sometimes skipping a day here and there at work, but it was hard. I felt like everyone around me could smell my stench. Because it wasn’t pretty at first. And by pretty, I mean I stunk (although I did my best to hide it by washing my armpits at work). The good thing is that I had already started eating better and the better I ate, the less stinky I was. During that time I tried dozens of natural deodorants, some not working at all, and some briefly (I would reapply it at work 5 times a day!). I gradually moved from antiperspirant to natural deodorants. Although there are many natural deodorants on the market that don’t contain dangerous ingredients, I noticed that I had to change brands very often because they weren’t working for long. A lot of the natural deodorants work with enzymes, and can suddenly stop working.

Something I noticed was that if I managed not to wear any for more than a few days, it wasn’t as bad as the first day after I stopped wearing any. Do you see what I’m trying to say? I would smell better after not wearing any antiperspirant/deodorant for 4-5 days in a row than I did on day 1. I don’t have any scientific backing for this (maybe I should search for it?), but I think it’s the body detoxifying from the crap contained in those products. Ever notice how we smell bad when we’re sick?

Then one day, I decided that there was no way around it, I had to stop. So, just like ripping a Band-Aid off, I stopped wearing antiperspirants and deodorants altogether. Some days were better than others, for obvious reasons summers are more challenging than winters. Here are a few tips I’ve learned along the way.

A couple of my closest friends mentioned to me that they’ve “smelled” me a few times in the beginning, but nothing bad enough to get them running to the hills! haha

How it worked out long-term

And now? Well after several years, I still don’t wear anything. Not even when I go jogging or work out. Especially if I exercise! I mean what’s the point of going to sweat if we block that sweat?? Just have a quick shower afterwards, or wipe your sweat off, and be done with it.

I do have a natural deodorant that I keep for special occasions, or if I have a meeting that makes me nervous, but that would be a handful of times per year. And you know the best part? My body is not as smelly as it used to be (most likely because I eat healthy food, lots of raw fruits and vegetables, and not a lot of meat). I also sweat less now (I used to sweat like a fountain). This also saves money, helps the environment by not releasing more chemicals out there, and most of all, is really good for my health.

So, back to my opening sentence, why do I feel embarrassed telling you this? Because of this strange world we live in where nothing can smell normal (think of all those products available out there to ‘hide’ smells: for your laundry, for the house, for the car, for the cat’s litter and even pet perfume, or for the stinky furniture, sports bag, etc. — whatever happened to just cleaning things?). They even have antiperspirants so powerful nowadays that it stays on for a week! I can only imagine what chemical ingredients are necessary to make that happen!

Why can’t we smell like humans? Why do we need so many chemicals to hide our scent?

I know this is a strange touchy/taboo subject, but what do you think about all this?? I’m feeling nervous about publishing this post… Please don’t smell my armpits if I see you! 😉