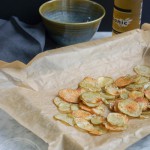 Healthy homemade chips, in less time than it takes to go buy a bag! Let’s be honest, during Olympics time, we watch a bit more TV and we like to have snacks on hands! Just because I eat healthy doesn’t mean I miss out on anything. Once in a while, my husband and I will buy a bag of chips, as natural as we can find (usually using sea salt and sunflower oil instead of cheap table salt and soybean or canola oil), organic or non-GMO if possible. You would be surprised by all the weird ingredients that are used in chips!

I’ve been thinking of trying to make my own for a while, probably one of the last very few things I haven’t made from scratch yet, because once again, I thought “Hey! I could make this 100% organic and very healthy, knowing what is used, and also baked in the oven with very little olive oil. So, I gave it a shot. It was so yummy, I almost didn’t have time to take a picture! hahaha I ended-up eating the whole batch (small), and had to make another batch later so that my husband could try them! lol

I also realized something while I made them. My small batch was made with 1 good-size potato. I ate the whole thing. But that was a small batch (because that’s all I can fit on my cookie sheet). What if someone would tell you to eat 4-5 big potatoes? Most would say “I can’t eat 4-5 big potatoes!”, yet that’s probably how much potatoes are in a regular size bag of chips! That’s a lot! But if you make them yourself, you’ll most likely eat less, and you won’t make a batch every day!

So, I made my own chips at home. It took 2-3 minutes to make (I used a mandoline — be careful using that!), and about 10 minutes to cook.

I made mine simple enough using some grey sea salt and freshly ground black pepper. Delicious! Next time I might try using a bit of paprika, and maybe even some apple cider vinegar…. 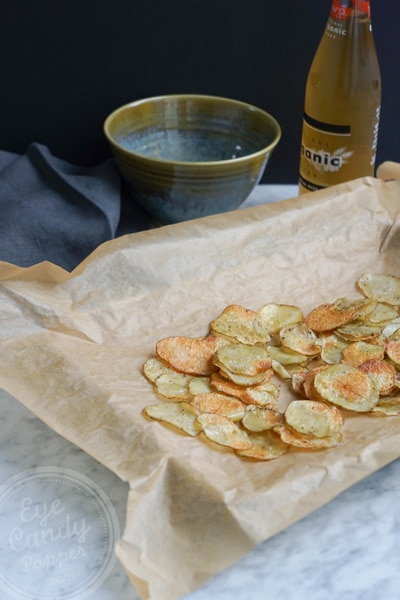 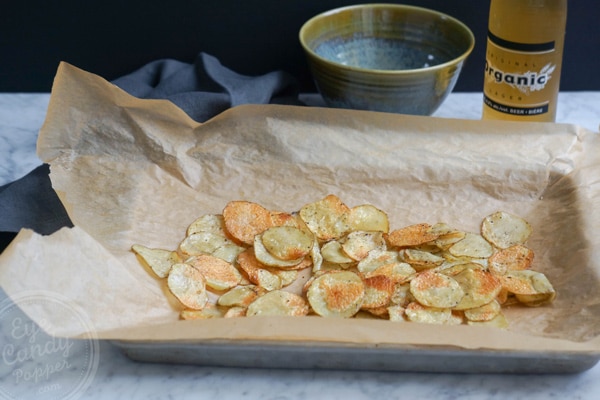 Put the thin slices of potatoes in a bowl and wipe the excess water with a clean cloth.

Add a dash of olive oil, and mix using your (clean) hands. You want to massage the oil on each slice, and then put it on the baking sheet, making sure to separate each of them as much as possible, but they don’t have to be perfectly lying flat on the pan (it most likely won’t fit otherwise).

It’s not exactly like commercial chips, but I am really pleased with this, and I know exactly what I’m eating! 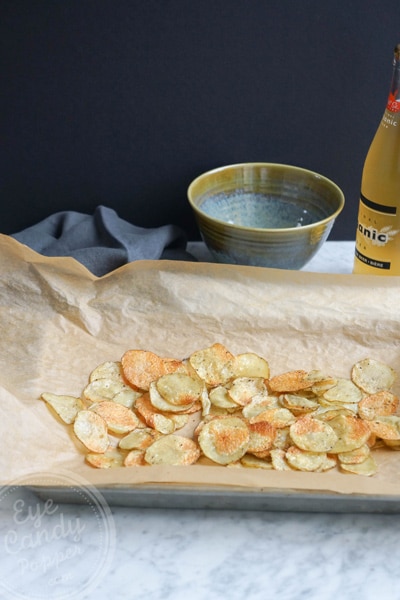 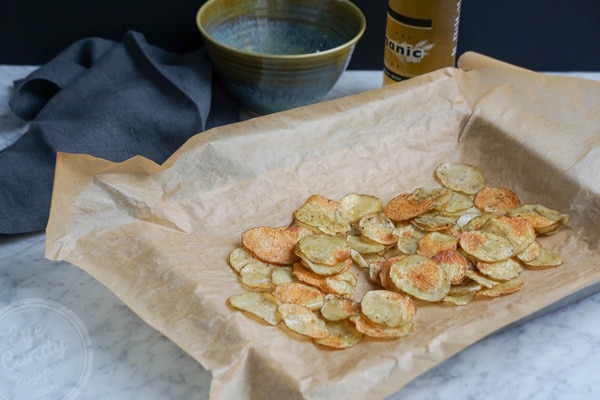