Sugar whaaat?! haha Have you ever heard of a “Sugar Shack”? Or the original name in French, Cabane à sucre? If you’ve ever been to Québec around this time of year and ventured outside the big cities, you’ve most likely been there or at least heard about it! I was in Quebec a couple of weeks ago and I had lunch at a delicious organic Cabane à sucre! Yummy!

For those of you who have never heard about it, let me briefly explain what it is. It’s basically a food celebration to mark the season of maple syrup, which happens at the end of the winter/early spring, when the days are sunny and warm but the nights are still fairly cold. This stimulates the sugar maple trees to produce more sap or “maple water”, which is harvested and then boiled at very specific temperatures to produce the delicious maple syrup so popular in Canada and many countries around the world. According to Wikipedia, “The Canadian province of Québec is the largest producer, contributing to about three-quarters of the world’s output” of maple syrup.

A maple syrup production farm is called a “sugarbush” or “sugarwood”. Sap is often boiled in a “sugar house” (also known as a “sugar shack,” “sugar shanty,” or cabane à sucre), a building louvered at the top to vent the steam from the boiling sap.

Maples are usually tapped beginning at 30 to 40 years of age. Each tree can support between one and three taps, depending on its trunk diameter. The average maple tree will produce 35 to 50 litres of sap per season, up to 12 litres per day. This is roughly equal to 7% of its total sap. Seasons last for four to eight weeks, depending on the weather. During the day, starch stored in the roots for the winter rises through the trunk as sugary sap, allowing it to be tapped. Sap is not tapped at night because the temperature drop inhibits sap flow, although taps are typically left in place overnight. Some producers also tap in autumn, though this practice is less common than spring tapping. Maples can continue to be tapped for sap until they are over 100 years old.

Not to be confused with the imitation “table syrup” (like Aunt Jemima or Mrs. Butterworth’s), which is made with high fructose corn syrup and contains no maple syrup whatsoever, pure maple water and maple syrup contain minerals and nutrients that are good for us, like calcium, potassium, magnesium, zinc and manganese.

Organic maple syrup means that no pesticides, herbicides or other synthetic chemicals have been used on the trees and in the general area around them. While most maple syrup producers don’t usually use pesticides on their trees, the certification guarantees it. The organic certification guidelines also include limiting the number of taps per tree, ensuring diversity in the forest to ensure farmers don’t cut down other competing tree species, using only stainless steel tanks and boilers and using all-natural cleaning products on the equipment.

One additional difference I found out about several years ago is that traditional maple syrup production can use formaldehyde tablets to block the tap holes on the trees in-between collection of maple water (which of course gets into the maple water). Organic producers are not allowed to use these. Unless you know the producers directly and know what they use or not, your best bet is to buy organic to be sure no chemicals were used.

Last year and again this year, I went to an organic sugar shack in the Mirabel area (Laurentians) called La ferme Les Fardoches. It’s owned by a really nice family that will immediately make you feel welcomed in their small Cabane à sucre. They have started a small production of organic vegetables and fruits in the summer as well and they make artisanal old-fashioned ketchups, meat pies, maple sugar pies, brioches and other delicacies, which they sell in their small shop (picture below), all made with real ingredients and, of course, with their delicious maple syrup! Everything is made on-site, from scratch and using mostly organic foods. It tastes authentic and delicious, unlike a lot of the more commercial sugar shacks out there where everything seems to be bathing in oil, salt and sugar. I highly recommend this one!

So, what do we eat at a Cabane à sucre? Traditional old-fashioned Québec food! I took a few pictures to show you, although I forgot some of it because it was so good that I ate everything too fast. Courses were brought to our table by the owner or his son, one by one, the table started filling up with all these delicious foods. [warning: not for vegetarians or vegans]

It started with a delicious split-pea and pork soup, freshly-baked bread and butter. Then came the rest: mini meat pies, baked beans, thick omelette baked in cast-iron pans, smoked ham, boiled potatoes, sausages, meatball stew, “pig feet stew” (a Quebec classic), all the condiments that go with the meal like homemade green ketchup and fruit ketchup (with pears) and pickled beets (I couldn’t stop eating those!), and let’s not forget the traditional oreilles de crises, which are crispy pork rinds. It’s basically pork skin, including the fat under, that is deep-fried. It sounds gross and it usually looks so gross that I had never had any until last year, despite being born in Quebec and having grew-up there. Haha. I tried it because it didn’t look as bad as all the others I had seen before. I gotta say, definitely not something I’d eat every day, but once a year, I’m okay with that because it’s delicious. It was salty but not too salty, fried just right and very mild in flavour. A really nice crunch mixed with the other foods.

Then for dessert, we had the choice between pancakes, Tarte au sucre (maple sugar pie), Pouding chômeur (bread pudding), Grands-pères (heavy cream and maple sugar poured over a slice of bread).

The atmosphere is really nice too: classic white and red chequered tablecloth and Quebec traditional folk music playing in the background. To end it all, you just put your winter coat back on and walk outside for la tire dans la neige (picture below), I think it’s called taffy in English, but it’s basically very thick maple syrup poured on top of clean snow, you grab a popsicle stick and use it to roll the syrup on it and voilà! A maple syrup lollipop!

I really enjoyed the fact that even a traditional meal like this can be made healthier and organic. We always have a choice; it’s up to us to make it. 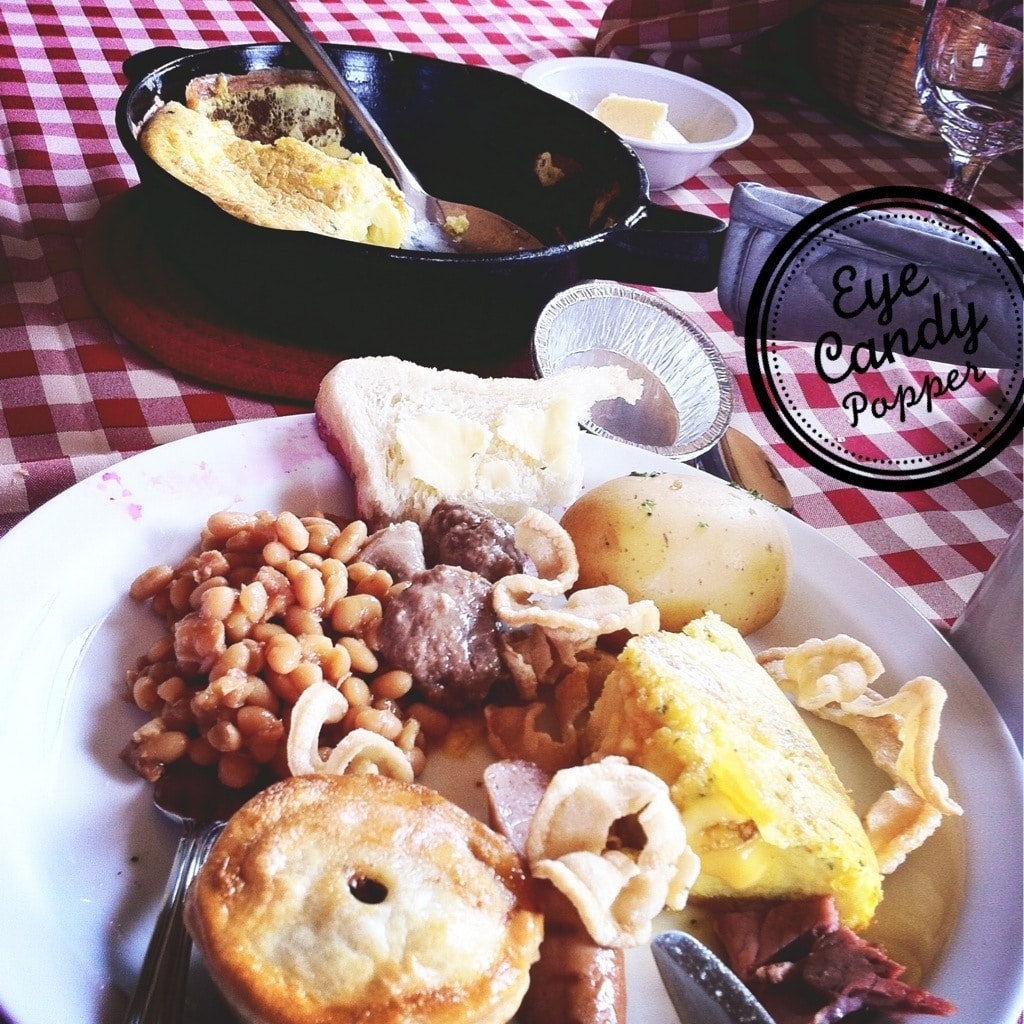 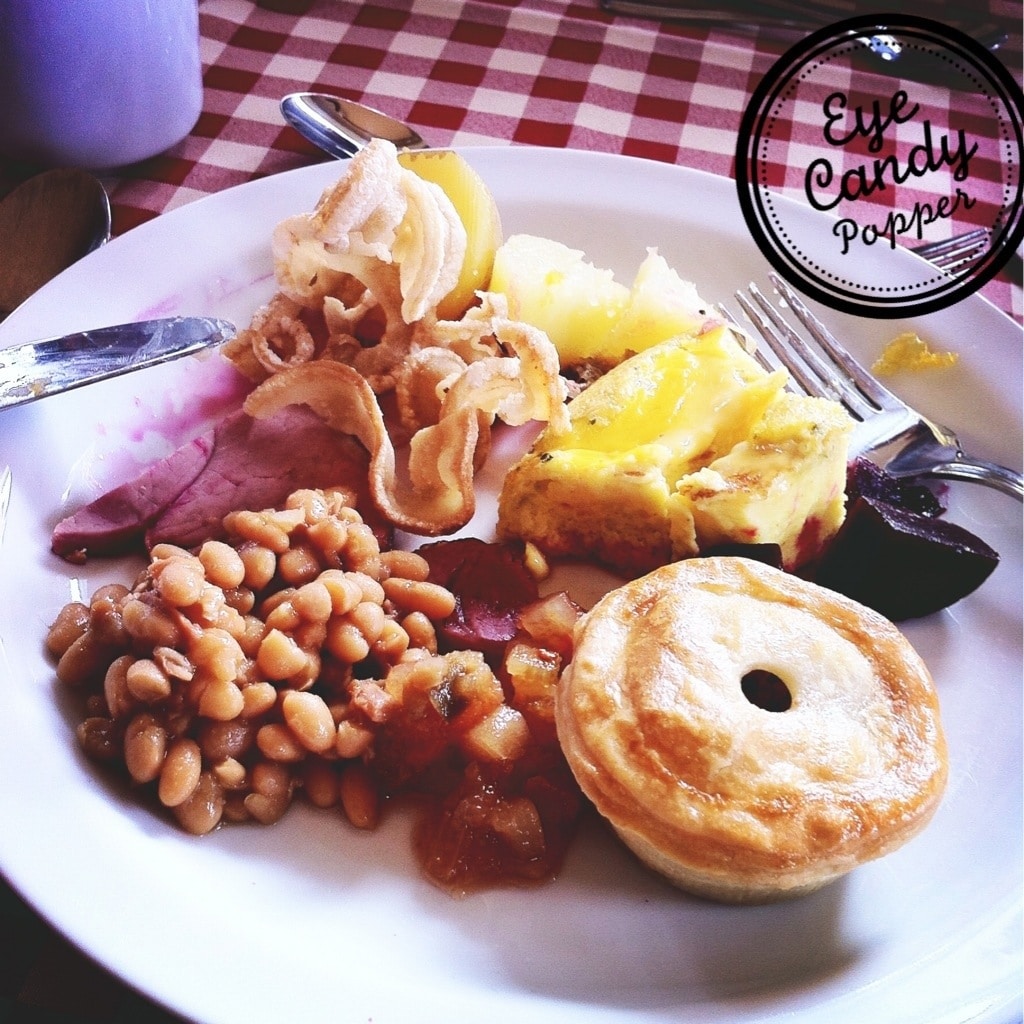 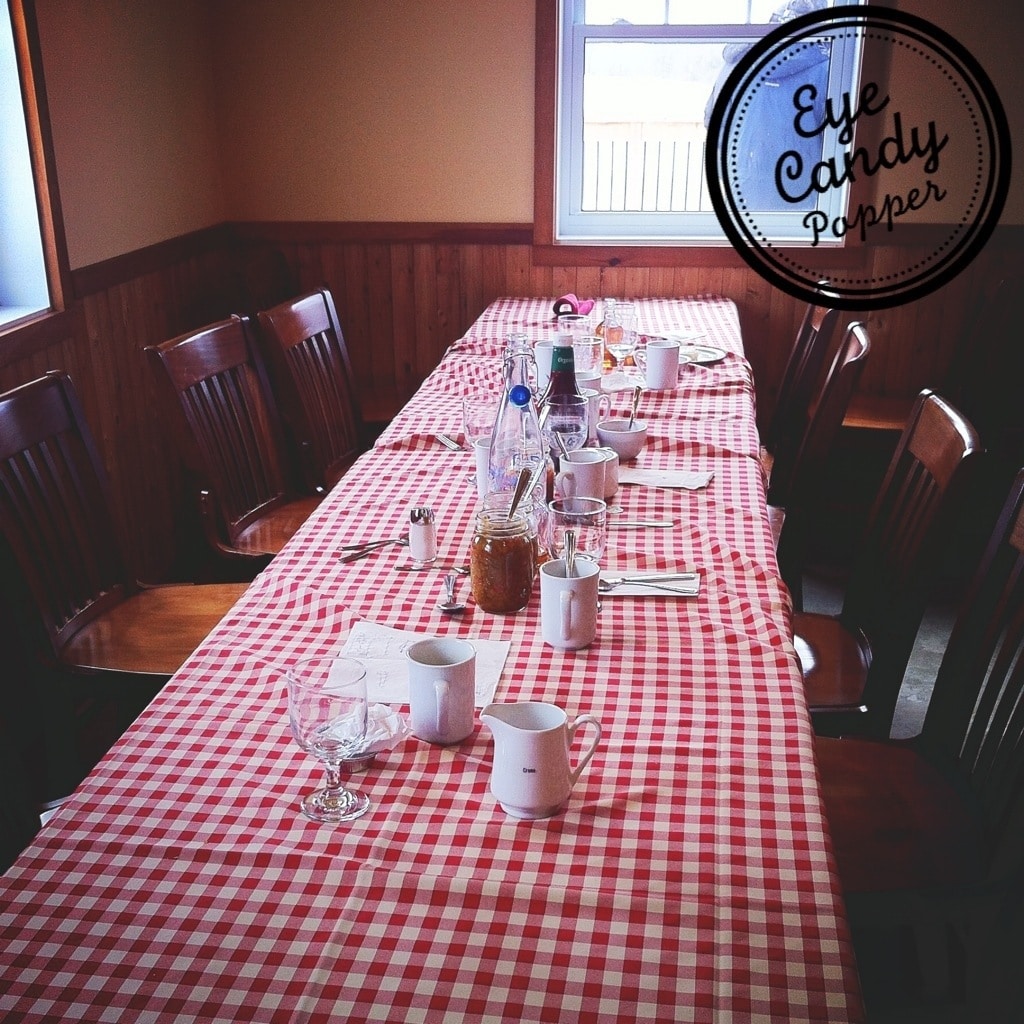 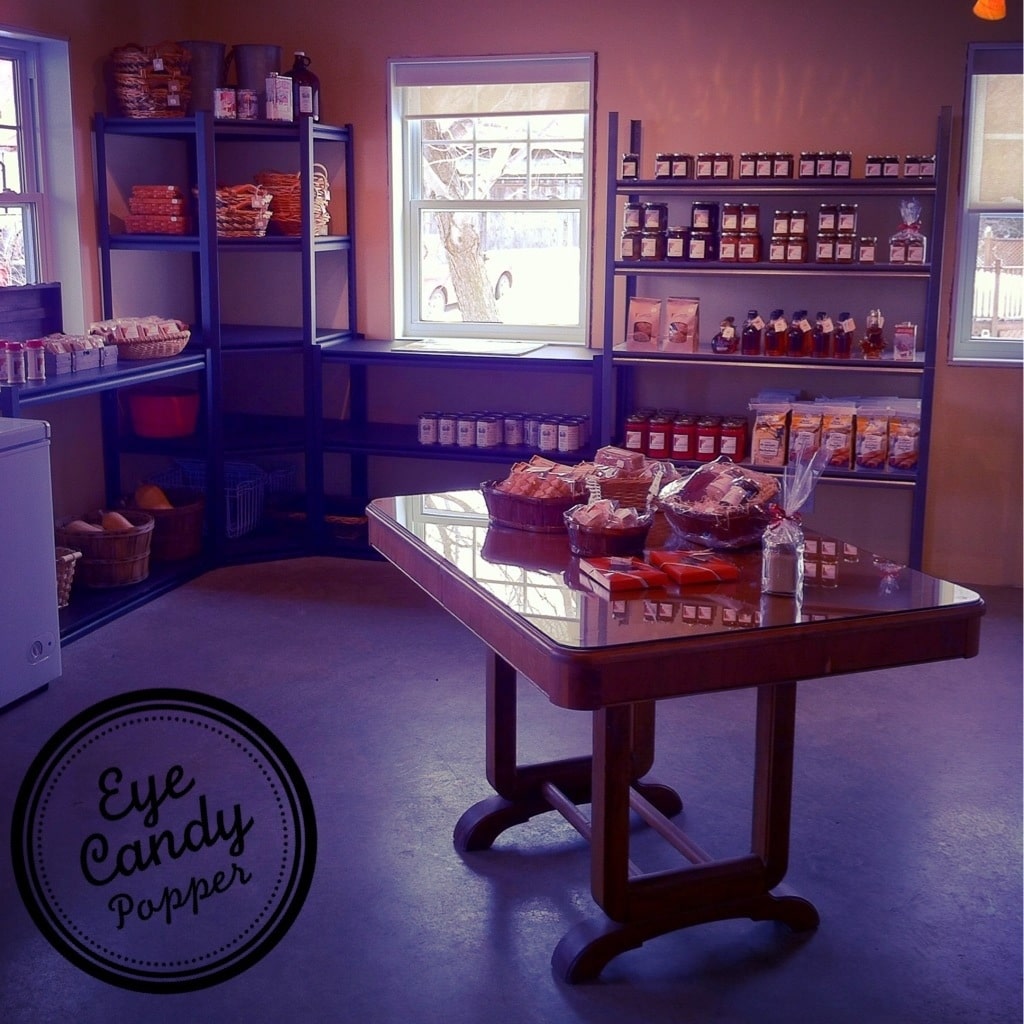 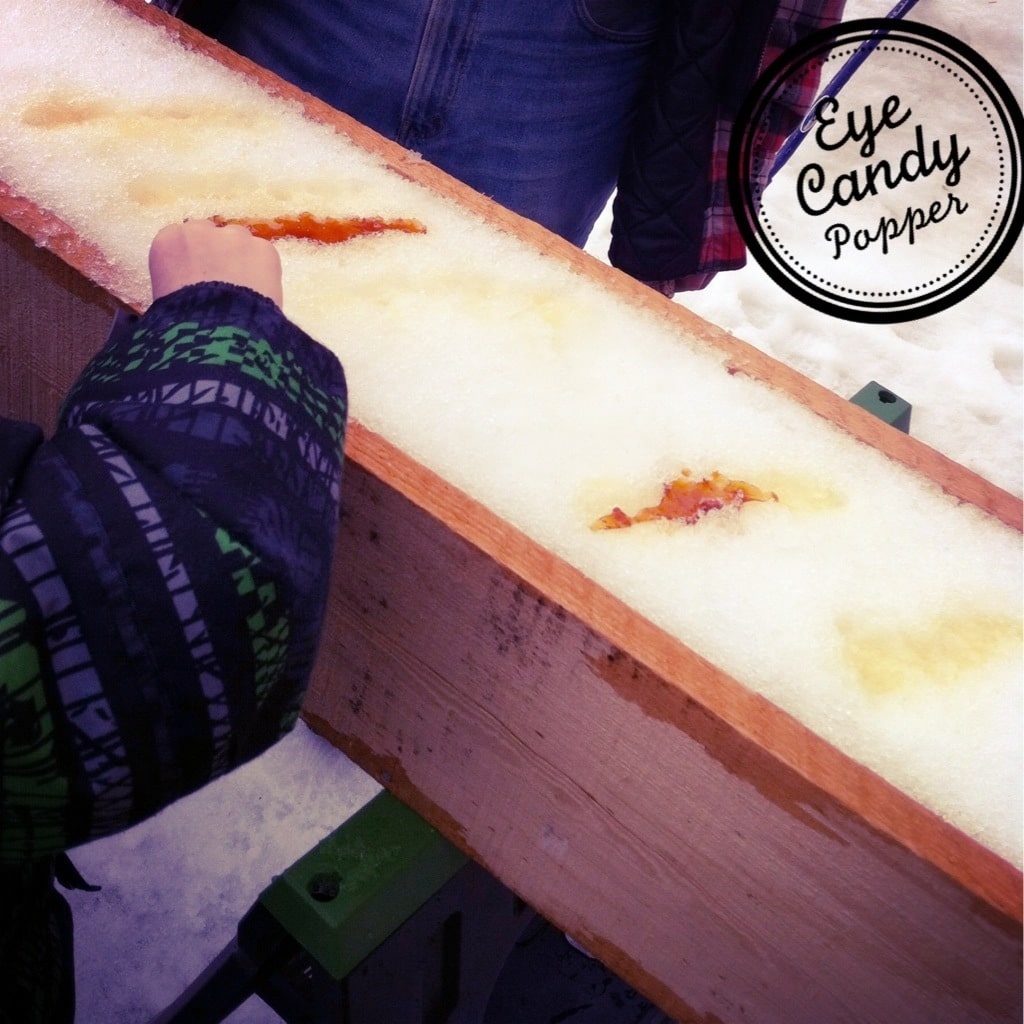 We hate spam, your email is safe with us!
Previous Post: « Immunity Soup | Vegan
Next Post: Discover your weeds: Milk Thistle »